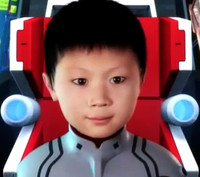 Sometimes, mere words cannot describe the sheer audacity with which China liberally takes concepts from Japanese anime and mutates them together, oftentimes making direct copies of other series, or worse yet making the end result super creepy.

The latest in such Chinese efforts is XiYouJi, which takes elements from Gundam SEED and Evangelion to make....well see for yourself below (or start at 2:28 for maximum brain damage).