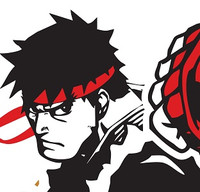 A while back in a review, I mentioned that playing fighting games online taught me that I was a small fish in a very big ocean. Of course, it's one thing to see titans going head-to-head, like the EVO Finals, but it's a whole different thing to see somebody just goofing around while playing a game and completely outclassing anything and everything you're capable of.

Okay, that's not entirely accurate when it comes to this video of pro fighting game player Desk, as he tries to do some very interesting and stylish things, simultaneously playing each character in games of Street Fighter III: Third Strike Online Edition one-handed--first some parrying and simple two-in-ones with Ryu, then showing off Makoto's invincibility frames, and what's probably the highlight of the video: performing a nasty Dudley-Remy counter-to-a-counter to a juggle while texting with his off hand.

Yeah, the dude's a robot. Maybe Desk is the start of the robot invasion, sent to study us puny humans through our digital combat entertainment.

What do you think? Is it as impressive as that guy who really got into playing Skyward Sword?

Street Fighter V Prepares to Add New Characters, Including One from Rival Schools