Gag manga about animals at a cafe 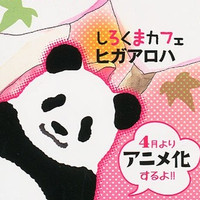 The cover of the March issue of Monthly Flowers reveals that Aloha Higa's Shirokuma Cafe (Polar bear Cafe) manga will be getting an anime adaptation starting this April. The manga is a gag manga about a polar bear who runs a cafe and a panda who is a regular customer. Three volumes of manga have been released so far.