FUNimation joins the club for people who have few friends 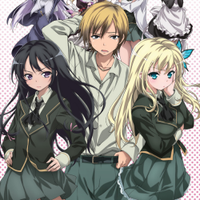 At Ohayocon today, FUNimation announced that they will be releasing Haganai (aka Boku wa Tomodachi ga Sukunai aka I have few friends) on DVD and Blu-ray at some point in the future. In today's announcement, FUNimation announced they have picked up "broadcast, home entertainment, merchandising, mobile and streaming rights" to the series. FUNimation simulcast the 12 episode series last Fall and is still streaming the series on their website.