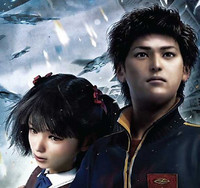 Sentai Filmworks has announced the license of Planzet, the second CG feature from director/writer/animator Jun Awazu. As with Awazu's earlier kaiju homage, Negadon: the Monster from Mars, the small team project Planzet was produced by CoMix—best known for their involvement with Makoto Shinkai's anime.

Planzet's CGI is directed by Shin Miyahara (Karas: The Prophecy), and music is by Shingo Terasawa with the main theme being sung by Chitose Hajime (Blood+). The feature will soon be available digitally through multiple outlets, with a home video release on DVD and Blu-ray scheduled for later this year.

From Sentai's description of the feature:

In 2047, an unknown, alien life-form descends upon the Earth, destroying all the major cities in one fell swoop.  The survivors unite and build a Diffusor to stop the Februus, the invaders the military would later codename the FOS, and a temporary peace is achieved.  Jump forward to 2053, the present.  PLANZET: The final plan, Plan Zed, to retake Planet Earth.  A last, desperate counterattack against the enemy.  Hiroshi Akishima, soldier in the Planetary Defense Forces Alliance, would like nothing better than a shot at the aliens responsible for his father’s death six years ago.  However, the new offensive requires the Diffusor to be dropped, leaving the entire planet terribly vulnerable once more.  Will humanity regain the stars or lose everything in the final, ultimate gamble?

VIDEO: Animals Attack in an Ad for the 40th Super Sentai Series