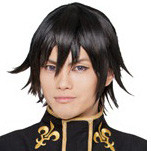 Last month, we had cast pictures of the former.

Now we have in-costume cast shots of the latter.

The play will run for 13 shows in April of 2012, from the 7th to the 16th at the Katsushika Symphony Hills Mozart Hall.