Available on DVD and Blu-ray later this year 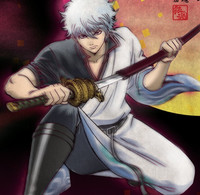 Sentai Filmworks has announced that they have licensed the 95 minute Gintama movie, Gintama: Shinyaku Benizakura-hen, which was released in theaters in Japan in April of 2010. The movie will soon be available digitally and will be released on both DVD and Blu-ray later in the year. Although a Blu-ray release typically means Sentai will be dubbing the release, the press release does not specify if it's getting a dub.

Sentai Filmworks has released the first 49 episodes of Gintama sub-only so far in 4 collections, the last in February of last year.

Here is the Japanese trailer for the movie: