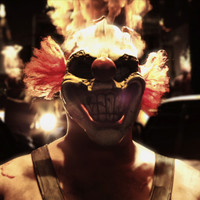 In an emphatic moment for corporate synergy, this week Sony publishes Twisted Metal for the PlayStation 3, releases Ghost Rider: Spirit of Vengeance in theaters (via its Columbia Pictures subsidiary), and announces that Ghost Rider director Brian Taylor has been brought on board to write and direct a Twisted Metal movie.

Taylor is also legendary among action movie fans as half of the team who wrote and directed the Crank movies. This will be his first project without collaborator Mark Neveldine.