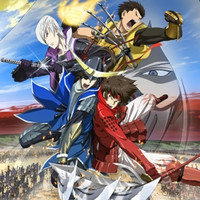 At their panel today at Katsucon, FUNimation announced that they have acquired the licenses to the TV anime series Level E and the movie Sengoku Basara: The Last Party.

Sengoku Basara: The Last Party is the movie for the Sengoku Basara TV series which premiered in theaters last June in Japan. FUNimation has acquired the the broadcast, home entertainment, mobile, and streaming rights to the movie and plans to release it on home video under the title Sengoku BASARA - Samurai Kings: The Movie in the 4th quarter of 2012.

Toyotomi Hideyoshi is defeated, but feudal Japan isn’t safe yet. The fallen villain’s most loyal and lethal minion – Ishida Mitsunari – is obsessed with carrying on Toyotomi’s legacy of violence in the name of vengeance. Ishida brutally cuts a bloody path across the countryside, even as Tokugawa Ieyasu attempts to rally Date Masamune, Sanada Yukimura, and the nation’s other warlords toward an era of harmony. Unfortunately, for peace to finally be achieved, the fires of war must be unleashed once more. With Japan’s fate hanging in the balance, one of the most epic, over-the-top battles in history begins in Sengoku BASARA - Samurai Kings: The Movie!

FUNimation has also acquired the broadcast, home entertainment, and streaming rights to Level E, which aired in the Winter of last year and was simulcast by Crunchyroll. FUNimation did not give a date for the home video release. Level E is created by Hunter x Hunter and Yu Yu Hakusho creator Yoshihiro Togashi. FUNimation will begin streaming the series next month and the series is currently still available on Crunchyroll.

Currently, there are several hundred species of aliens on Earth, and humans are completely oblivious to their existence! One day an amnesic alien prince crash lands on the planet, and all hell breaks loose! Now the universe’s greatest mind, with the worst personality, has become Earth’s biggest royal pain.

FUNimation also announced at the panel at they will be releasing a mobile app for Android and iPhone next month. More details on their plans for the application can be found on FUNimation's blog.