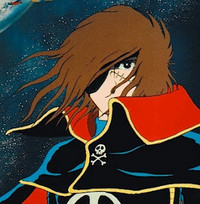 Harlock is directed by Rintaro (Galaxy Express 999, Metropolis), and originally aired on TV Asahi from 1978-1979, and is based on the manga by Leiji Matsumoto. More info on the release as it's made available. Anyone looking to pick this classic up when it comes out?