"Entertaining communication device" or Rise of the Machines? 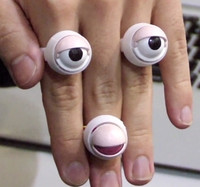 The immortal phrase “talk to the hand” takes on new meaning as researchers from Japan's Keio University have painstakingly developed robotic rings that mimic human eye and mouth movements. Watch the video from the boffins at DigInfo below for a full demo...

Is this a bold new step towards a grand technological future of wearable robot rings, or just a colossal waste of time and resources? DECIDE NOW before a robot on someone's hand tells you what to think!