Live concert for series in July 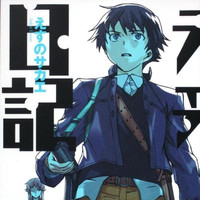 At the end of the last episode of The Future Diary (Mirai Nikki) TV series, which aired earlier today, it was announced that a new project is in the works with a screen that read "Next Project begins." No other details were given, but it had been previously announced that there would be a major announcement at the "Mirai Nikki The Live World" concert on July 29th. The announcement for the concert also said that video for a new, 3rd, opening and ending theme would be revealed there.

FUNimation announced last week at Anime Boston that they have acquired home video rights for the TV series.