Sequel to be released August 30th 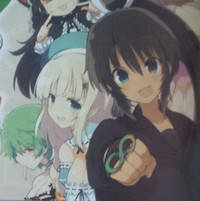 Early sales copies of this week's Famitsu have revealed that the issue announces the 3DS game Senran Kagura ~Shoujo-tachi no Shinei~, which has sold 90,000 units so far, is both getting a sequel and eventually an anime. In the article announcing the 3DS sequel game, Senran Kagura BURST ~Guren no Shoujotachi~ is the following: "Senran Kagura, with a TV anime project in the works, is furthered powered up in bust.. er no, Burst!"

The sequel itself has you playing as the rivals of characters from the first game and among the new features, the game will allow you to use 3D mode in the locker room. Senran Kagura BURST ~Guren no Shoujotachi~ will be released on August 30th in Japan for 5980 yen.

Tags
senran kagura
« Previous Post
VIDEO: There's No Way My Circuit Board is This Cute
Next Post »
FEATURE: Newest Vocaloid PVs for THE [email protected] [email protected] 20
Other Top News
12 Comments
Sort by: