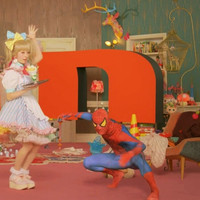 Forgive us for publishing two stories about Harajuku girl supremo Kyary Pamyu Pamyu in one day, but we think this is worth it…

Brace yourselves, true believers: Kyary has teamed up with the amazing Spider-Man in a new commercial for job hunting magazine Weekly an. Watch the full CM, featuring the song "Kyary ANAN," below.

So what the heck is Spidey doing next to Kyary? Well, the commercial is partially a tie-up for the upcoming Spider-Man movie reboot which opens in June. Kyary has been quoted as saying, “I’m very happy to be a part of this collaboration CM! Spider-Man is so cool!”

Spider-Man has a long history in Japan, ranging from his own downbeat manga in the ‘70s to his very own totally awesome Power Rangers-esque live-action superhero show.

Either way, we're happy that Kyary has joined forces with the wacky wallcrawler and hope that they’ll keep Harajuku safe from fashion crimes.