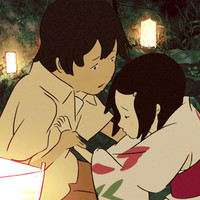 Between now and May 18th, Toei is offering a look at the first 20 minutes of Kônosuke Uda's (one of the directors of the One Piece TV series, as well as the helmer of its fourth and seventh movies) new anime movie Niji-Iro Hotaru ~Eien no Natsu Yasumi~. The footage is in raw Japanese, but the film's unique style is well worth a look.

The adaptation of Masayuki Kawaguchi's nostalgic novel is scheduled to hit Japanese theaters on May 19th.