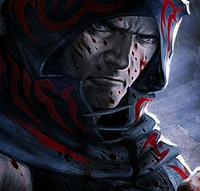 Inafune is heading up development on Soul Sacrifice with composers Yasunori Mitsuda (Xenogears, Chrono Trigger) and Wataru Hokoyama (Resident Evil 5) on the tunes. It's scheduled to hit Vita in Japan this winter.

"Toukiden" Mixes It Up with "Soul Sacrifice" Armor and Mission DLC