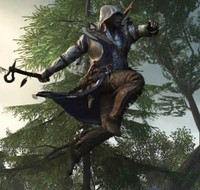 We've seen cinematic teasers for Assassin's Creed III, but Ubisoft promised a look at gameplay once the community unlocked it through its Facebook page. Leave it to the Internet to take care of such matters, because we can now watch protagonist Connor, AKA Ratohnhaké:ton, take on Redcoats and… a bear.

The clip also details some of the pre-order bonuses available. Pre-order through GameStop, for instance, and you'll get the Lost Mayan Ruins single-player mission and the Sawtooth Sword weapon.

Assassin's Creed III comes out in North America on October 30.