Lengthy manga series to be released in hardcover box set 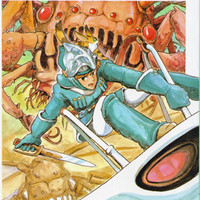 Hayao Miyazaki's ecological epic Nausicaä of the Valley of the Wind is back in the news thanks to inspiring the monster in the live-action short for Hideaki Anno's tokusatsu (special effects) exhibit. While the manga version was last printed in North America in 2004, Viz will be bringing the classic back this fall.

According to an Amazon listing, a 1,104-page hardcover box set will be released November 6 for $68.

The seven-volume series is Hayao Miyazaki's longest manga work, running in Animage magazine between 1982 and 1994. The story of a messianic heroine in a devastated world served as the inspiration for the anime movie by Studio Ghibli precursor Topcraft.