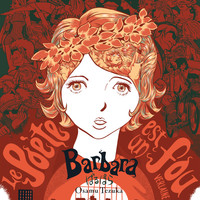 Back in January, Digital Manga Publisher launched a campaign on crowd-funding site Kickstarter to fund the release of legendary manga author Osamu Tezuka's mature work Barbara. Fans responded by pledging almost three times its $6,500 goal. Now, the publisher has shown off the shirt and poster to be offered with the book.

This 18"x24" poster will be screen-printed in six colors. The design was created by Digital Manga graphic designer Matt Akuginow using art from the book. The inscription is from a poem by Paul Verlaine, who is quoted extensively in "Barbara." It means "The poet is a madman." The full stanza reads:

Which means (in my own very kludgy translation):

The poet is a madman lost in adventure,
Who restlessly dreams of ancient battles,
Of numberless exploits he makes his own,
To sing them for himself and the men of the future.

This T-shirt is being printed for us at Forward Printing in Oakland, CA on 100% made in the USA cotton T-shirts from American Apparel. We'll be using water-based ink for a super-soft pattern that will last a long time (read this for more information on why this is awesome). It will be available in unisex sizes from S to 3XL and in Ladies' sizes from S to 2XL. (Larger sizes may be available if needed, so send me a message if you need them.)

How do I get one?

If you're not a backer or your reward level doesn't include a T-shirt or poster and you want to receive one, CLICK HERE. Fill out the survey and we'll get in touch with you.

Important notes about this:

"Put simply, Barbara is the story of a man caught between artistic decadence and madness." - Osamu Tezuka

Barbara opens with famous author Yosuke Mikura wandering the packed tunnels of Shinjuku Station, where he makes a strange discovery: a drunk woman, her rags caked in mud, who can quote French poetry. Her name is Barbara. He takes her home for a bath and a drink, and before long Barbara has made herself into Mikura's shadow, saving him from egotistical delusions and jealous enemies. But just as Mikura is no saint, Barbara is no benevolent guardian angel, and Mikura grows obsessed with discovering her secrets, tangling with thugs, sadists, magical curses and mythical beings - all the while wondering whether he himself is still sane.