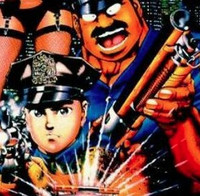 The increasingly awesome Discotek Media announced their latest anime addition tonight via Facebook, as usual. This time it's a particularly bold pick: Mad Bull 34. Discotek plans to release the OVA series on DVD next year, with both the English dub and original Japanese with English subtitles.