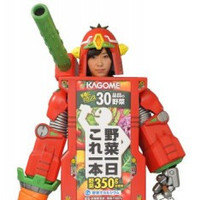 Costume design for the sentai spokes-idols comes from Yasuhiro Nightow of Trigun fame.

For some more background see here.