The Amusement Club returns in "YuruYuri♪♪" 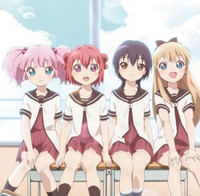 Picking up right where we left off with the Amusement Club, Crunchyroll is adding the second season of YuruYuri to its summer lineup. The original cast returns for season two, as does director Masahiko Ohta (Rozen Maiden, Minami-ke).

Full details regarding territories and streaming dates for season two of YuruYuri will be announced soon. Crunchyroll's synopsis:

Get some laughs with the return of YuruYuri!

The ‘Amusement Club’ foursome continue their unusual activities – though still not clearly defined, organized, or explained – in the illegally-occupied-by-the-club room of the former tea ceremony! While the Student Council continues to attempt to shut them down, we can all rest assured that these girls will continue to maintain the same level of laid back fun that made us fall in love with them in the first place!

Tags
yuruyuri
« Previous Post
Official Dub Cast for "Is This A Zombie?" Revealed
Next Post »
VIDEO: "Atelier Ayesha" Play Video is an XL Dose of RPG Action
Other Top News
35 Comments
Sort by: