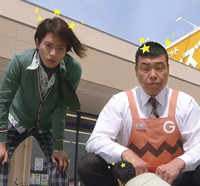 The adventures of actor Jean Reno (Léon: The Professional, Onimusha 3) as Fujiko Fujio's iconic robot cat Doraemon continue in the latest Toyota Commercial. This sixth ad finds Suneo (Tomohisa Yamashita) hooking Nobita (Satoshi Tsumabuki) up with a car so small that Doraemon has to bust out his "Small Light" to help him get behind the wheel.

The previous video in the series of Doraemon Toyota ads—which depict the anime/manga cast all grown up and portrayed by real actors—hit the Internet in April. You can go back even further to see where it all began.