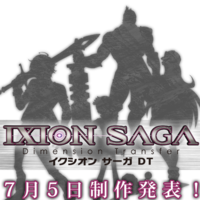 Capcom's online battle game Ixion Saga is not even officially out yet (even in Japan), but a TV anime treatment was revealed today:

Ixion Saga DT details are scheduled to be announced via Nico Nico live stream on July 5th, but so far we know from the event stream website that Shinji Takamatsu (Gintama, School Rumble) is directing and a "gorgeous line-up of male voice actors" can be expected.

In the meantime, you can watch the game's debut trailer from last year:

Presumably there will be characters from each class (fighting with a range of weapons that include guns, swords, and magic), but hopefully something more specific will come out of the July 5th announcement!