The first (unofficial) live-action appearance of Spider-Man from 1969 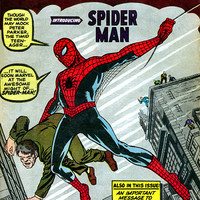 The term "cosplay" was coined by Studio Hard's Nobuyuki Takahashi while attending the 1984 Los Angeles Science Fiction Worldcon, and the generally accepted narrative is that Japanese cosplayers were inspired by Star Trek conventions and other American activities.

See a bit of proto-cosplay in action in a 1969 Spider-Man fan film that is becoming a bit of a viral sensation.

The first ever documented Spider-Man fan film, and the first (unofficial) live action appearance of Spider-Man from 1969! This was produced by Donald F. Glut and was his last amateur film (he had produced many other Marvel fan films before this) before moving on to write for classic cartoons like Transformers and Spider-Man and His Amazing Friends.

I love the costume (Don Glut is wearing the red and blues himself), it looks heavily inspired by Steve Ditko's work. And notice the use of the Captain Action Spider-Man figure for web swinging and wall crawling; that goes for huge bucks now. The villain in this fan film, Dr. Lightning, is not a real Marvel character and was just created by the guy's making the film.

There is also another elusive Spidey fan film that is from 1974 entitled "Spider-Man Versus Kraven The Hunter" by Bruce Cardozo. Unfortunately, this student film won't be found online anywhere because Bruce Cardozo apparently against it. I do hope this is not true as it could be a potential lost classic and it would be very unfortunate if we were not allowed to see it. It has been shown at several fan film festivals, however.