Three anime announced at AX 2012, with some fresh promos 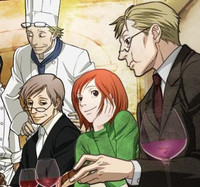 Right Stuf announced some new acquisitions at Anime Expo 2012 today, with Ristorante Paradiso, Hyakko, and Aoi Hana joining their lineup. To celebrate the shows, they also posted some fresh promos! Check 'em out, along with release info, below.

Ristorante Paradiso will be released as a complete series DVD set this fall, with Japanese audio and English subtitles. Based on Natsume Ono's manga and animated by David Production (The Book of Bantorra), the 11-episode series originally aired on Fuji TV's Noise timeslot and was simulcast on Crunchyroll. Right Stuf's synopsis:

When Nicoletta was a little girl, her mother, Olga, abandoned her and ran off to Rome to remarry. Now, 15 years later and a young woman, she travels to Rome with the intention of ruining her mother’s life. She tracks Olga down to a restaurant called Casetta dell’Orso, but the second Nicoletta steps through its door, everything changes. It’s a peculiar place staffed entirely by mature gentlemen wearing spectacles, and like their clientele, she is helpless against their wise smiles and warm voices. Before Nicoletta realizes it, her plans for vengeance start to fade, and she’s swept up in the sweet romance of everyday Italian life.

Right Stuf will be releasing the 13-episode Hyakko as a complete series DVD set with Japanese audio and English subtitles. The set currently has a 2013 release.

Hyakko—based on the slice-of-life manga by Haruaki Katō—follows four high school girls and their private school classmates. Produced by Nippon Animation, Hyakko originally aired in Japan in 2008 on TV Tokyo, and was simulcast on Crunchyroll.

Directed by Honey and Clover's Kenichi Kasai, Aoi Hana: Sweet Blue Flowers adapts the the manga by Takako Shimura (Wandering Son). The 11-episode series aired on Fuji TV's Noise timeslot and was simulcast on Crunchyroll. Right Stuf will release it in a complete series DVD set in 2013, with Japanese audio and English subtitles.

Anyone plan on purchasing any of these sets?