Anime based on Hajime Taguchi's light novels starts on July 6 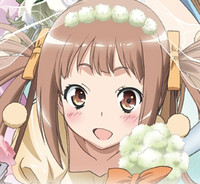 By now I think most of us know the, um, interesting premise behind Kono Naka ni Hitori, Imouto ga Iru! (roughly One Among These, Is Your Sister!), AKA Nakaimo. The love comedy, based on Hajime Taguchi's light novel series, follows Shougo Mikadono as he tries to find a girl at school to marry as a condition of his inheritance. However, one of the girls there is his younger sister, who he's never met. Check out the TV commercial below.