Tokusatsu heroes and Gundam get lost in dungeons on September 6 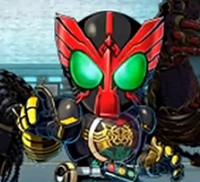 Lost Heroes is a Nintendo 3DS and PSP dungeon crawler featuring a handful of tokusatsu (special effects) and anime heroes, from Kamen Rider to Gundam and Ultraman. The latest clip shows off some of the RPG action, wrapping things up with a brutal Kamen Rider/Ultraman crossover attack.

Lost Heroes is due out in Japan on September 6.