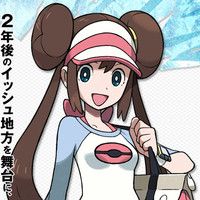 "Pokémon Black/White 2" Deoxys Distribution Kicks Off on May 8