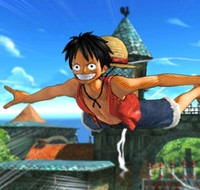 We may not be getting a fancy gold PlayStation 3 bundle to go along with it, but at least we know when we'll be getting One Piece: Pirate Warriors. Namco Bandai's super stretchy Musou-style action game is now set for a September 25 release in North America, exclusively as a PlayStation Network download.

The North American release was previously penciled in for November. Europe gets a physical release on September 21 with the option of a special collector's edition. Here's Namco Bandai's official description of the game:

One Piece: Pirate Warriors puts players in the role of Luffy and other pirates from the popular anime series. Players team up with other members from  the Straw Hat crew to defeat the unrelenting onslaught of pirates. In One Piece: Pirate Warriors, players will be able to fight waves upon waves of enemies in both online and offline co-op modes with their friends.

Tags
one piece, one piece pirate warriors, one piece pirate musou
« Previous Post
Crunchyroll to Stream "Nakaimo ~ My Little Sister is Among Them!"
Next Post »
VIDEO: "SD Gundam G Generation Over World" Trailer
Other Top News
11 Comments
Sort by: