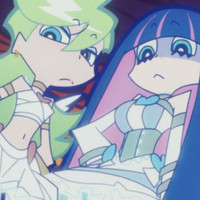 To promote the new billingual DVD of Panty and Stocking with Garterbelt, FUNimation asked fans to suggest dirty phrases to be read by the English dub cast of the blue humor loaded anime series. The top picks were selected at Anime Expo, with a video filmed at the event.