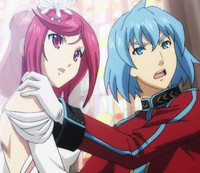 Toki to Towa (Time and Eternity), or Tokitowa, is an upcoming RPG from Imageepoch (Luminous Arc, Fate/extra) that features hand-drawn character animation from studio Satelight (Macross Frontier, Fairy Tail). We covered the setup when it was first announced in January, and since then we've been treated to a short promo video and some beautiful screenshots and artwork.

Now, at last, we have a full trailer for Tokitowa, offering a solid look at everything from the wedding tragedy that kicks things off to the cast and the gameplay, which features hand-drawn 2D animation over 3D backdrops.