Mickey returns, this time to multiple platforms, on November 18 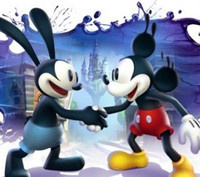 I wasn't a huge fan of the first Epic Mickey, but for some reason I'm oddly optimistic about its sequel. Epic Mickey 2: The Power of Two leaps away from Nintendo exclusivity, landing on Xbox 360, PlayStation 3, and Nintendo Wii on November 18. Get up to speed with the story trailer below.

As for portables, the very pretty-looking Epic Mickey: The Power of Illusion is on its way to Nintendo 3DS. Anyone looking forward to either game? Were you a fan of the first one? It's Saturday, let's chat!

Disney's "Epic Mickey 2" May Be On the Way