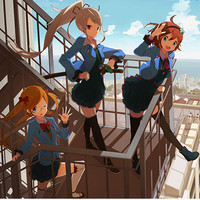 In Square Enix's soon to be released smartphone gal game Otome Break, you're a highschool student who teaches robot girl classmates how to love. By helping them pick out clothes and meals, you're assisting their dreams of becoming real girls.

Set to be released for iOS August 8th and Android later in the month, Japanese smartphone owners will be able to download the game for free, then buy the three characters, voiced by  Miho Arakawa (Himari Takakura in Mawaru-Penguindrum), Ayako Uemura, and Yui Horie (Chie in Persona 4, Raika Oda in Listen to Me, Girls, I'm Your Father!) for 1000yen ($13) each.