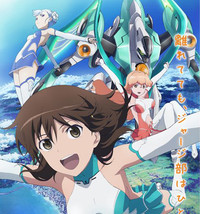 We were waiting for the Lan spotlight, but after a couple of cute but short Madoka and Muginami TV commercials, Namco Bandai is back with a solid 100-second look at game/OVA hybrid Rinne no Lagrange: Kamogawa Days.

Scheduled for release on August 23rd, Rinne no Lagrange: Kamogawa Days is a hybrid OVA/game set between the first and second seasons of the mecha anime series.