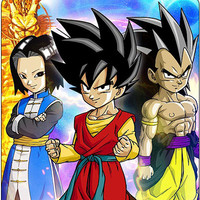 Following the recent news that Dragon Ball will be making its way to the 3DS via a port of the arcade digital card game Dragon Ball Heroes, a quartet of new screenshots show off what the game will look like on the Nintendo handheld.

Footage of the arcade game:

Namco Bandai is shooting for a spring 2013 release date for the game.