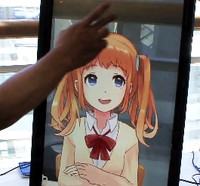 It seems like every other day, Japan unleashes some new kind of technology that has the potential to change the world…or destroy it utterly. This time, the stakes are high as a new software called Lve2D has the ability change 2D hand drawn artwork into 3D objects that can be smoothly manipulated on the fly. Sounds complicated? Well, just watch the impressive demo below, involving a cute girl and...a fickle finger of fate.

Currently, the tech is being used for dialogue based video games (read: waifus), but it's easy to see how it could also be used to help give a hand drawn look to digital animation. Anyone else have any bright ideas on how this software could be used for good or evil?

PS: I almosy spit out my Apple Jacks when I noticed *which finger* the guy was using during the demo...