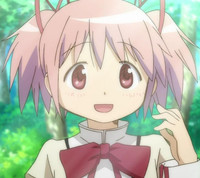 Of note in the promo is that the teenage vocalist duo ClariS will be providing the opening theme for the first film in "Luminous" which is heard in the background. Anyone still excited for the movie adaptation of the Madoka Magica series, or are you waiting on the third film for the new story, as I am?

New Mini Madoka Magica Figure Is Here to Save Your Soul