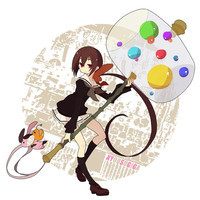 Namco Bandai has kicked off the new run of Kyousogiga shorts with the first video launched on their Youtube channel. The project was originally conceived as a collaboration between Banpresto and Toei Animation, with the story written by Izumi Todo (Toei's pen name for its production team) and directed by Rie Matsumoto.