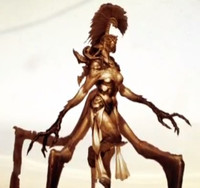 A new PAX trailer for God of War: Ascension weaves a tale of three vengeful deities known as The Furies, not to be confused with The Warriors' equally imposing Baseball Furies. See what Kratos is up against in the clip below.

God of War: Ascension is angrily and violently barreling toward a March 12, 2013 release on PlayStation 3.