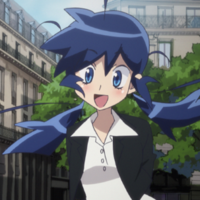 Toei Animation (Dragon Ball, One Piece, PreCure) has been working with ZAGToon, a division of the French animation production company Univergroup, for a new TV anime series called Lady Bug or Miraculous Ladybug. The 26 episodes magical girl series is scheduled to be broadcasted in France and Belgium. The series is also co-produced with Method Animation (The Little Prince). The company is responsible for the series' CG elements.

ZAGToon has posted a 3 minutes 18 seconds promotional video onto YouTube. There is no information about the Toei's Japanese staff. You can only guess who they are at this moment. Lady Bug also has a stereoscopic 3D full-length movie in the works, but Toei has involved in only the 2D TV series project.

The ornaments grant the power of Luck to whoever wears them. Yet there is one condition : they have

to be worn in an altruistic manner, or else, beware of the consequences ! Whenever the situation needs it,