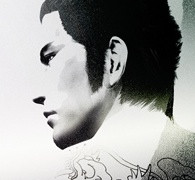 Yakuza 1 & 2 HD Edition—which features a few improvements aside from visuals, including the ability to access the item box via telephone booths—hits PS3 in Japan on November 1.