Nintendo Dates and Prices Wii U for North America 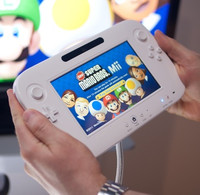 Nintendo's Wii U preview event is still roarin' in NYC today, but they already revealed the North American pricing and release date information for the console, which will be available on November 18 in two forms.

Then there's the Deluxe Set (32GB), priced at $349.99. It includes all the stuff in the Basic Set, plus a GamePad charging cradle and a stand for the GamePad and Wii U console.

Wii U lands in Japan a little later on December 8. More to come on the console later! What do you think about the North American price point?