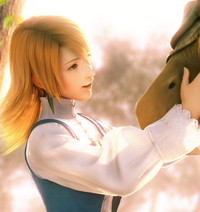 Well, this was kind of a no-brainer, but those of you looking forward to the PSP port of the Nintendo DS version of Final Fantasy III now have a solid date to mark on your calendars. It debuted in Japan this week, and is set to arrive on PlayStation Network in North America on September 25.

Final Fantasy III already had English text, so it's not surprising to see it arriving in the west so quickly. New features for the PSP port include graphics optimized for 16:9, an image gallery, an auto-battle system that doubles combat speed, and the option to switch between the new and original soundtrack.

Anyone plan on picking up FFIII on PSP?