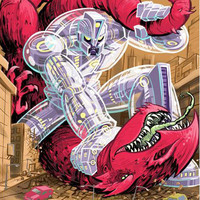 Good news for anime fans who still have cable service. Jason DeMarco, VP of strategic marketing for Cartoon Network and Adult Swim, revealed on Twitter that starting next week, the Toonami programming block "expands to 6 hours from midnight-6am, without repeating from 3a-6a."

Also from his Tweets...

I'm happy to announce that we will also be running the great SYM-BIONIC TITAN, and also the great new THUNDERCATS! Also, BEBOP will make it's return, running from 5a-6a. Finally, this Saturday we'll start running a new lineup spot that gives you the whole rundown, which will air every night for a whole. Hope this news makes you guys as happy...

We've wanted those shows since the beginning. I think Sym-Bionic is Genndy's best work. Just took a little paperwork For anyone thinking Sym-bionic is not "mature enough," watch this scene: http://www.youtube.com/watch?v=-Nq12k4xM7I … This is advanced storytelling. Genius.

The new Thundercats was animated by anime production house Studio4C, who are also responsible for the new Berserk movies. Sym-Bionic Titan is a mecha homage from Samurai Jacks's Genndy Tartakovsky.

Are you excited to see these shows run on TV again?