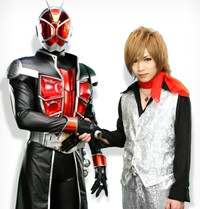 “Life is SHOW TIME” is the opening theme song of Kamen Rider Wizard, the latest incarnation of the insanely popular transforming Kamen Rider super hero franchise. It is sung by Kiryuuin Sho, the front man of Visual kei “air” band Golden Bomber, who not only freely admit to not playing any of their instruments, but also make some super goofy videos to boot.

“Life is SHOW TIME” marks Sho’s 1st solo outing, and he’s pulled out all the stops for the promotional video, which features eye poppin’ pole dancers, martial artists, pro-wrestlers, a monster army out to dogpile the singer, and of course, plenty of face time time with the big guy, Kamen Rider Wizard himself. Something here is make you bound to type WTF, so enjoy below!