After more than 40 volumes, manga planned to wrap up in November 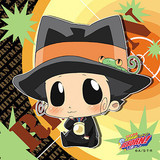 After the chatter about Katekyo Hitman Reborn! drawing to a conclusion, it looks like the Akira Amano manga will be ending sooner rather than later. The 2004, 40+ volume manga about a Japanese teen and a baby mafioso  is expected to be wrap up in this year's Shonen Jump issues 50 and 51, on sale the second and third weeks of November.

Crunchyroll Adds A Special REBORN! OVA To Its Catalog (CORRECTED)