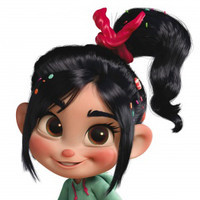 Disney's upcoming CG animated Wreck-It Ralph is the story of an arcade game villain who is inspired to turn over a new leaf after meeting a cute girl character named Vanellope von Schweetz in cart racing game Sugar Rush. While Japanese marketing is being tailored to that region, with plenty of attention paid to the moe sidekick, to the extent that the movie is being relabeled Sugar Rush, the whole world will get to hear Japanese pop sensation AKB48 featured performing the theme song to candy coated fictional game.

versus the American version