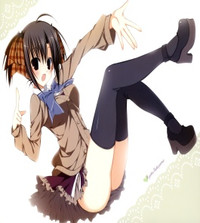 Sentai Filmworks took to its panel during the NekoCon convention to detail its future release plans for next year and has confirmed the following titles, which are currently streaming, will be released on home video:

The following titles will be getting an English dub when released on home video next year, which includes Blu-Ray:

The following titles will be released on sub-only DVD with a preliminary release planned for next February:

Anyone waiting on any of the titles to go up for pre-order? Kinda bummed that AnoNatsu is only getting a DVD release, though.
In releated news, some interesting info to chew on was revealed during the panel:
via Fandom Post
Humberto Saabedra is the Editor-in-Chief of AnimeNews.biz, PhoneNews.com and an occasional columnist for Ani.me. He can also be found musing on his favorite 2D girls at @AnimeNewsdotbiz.
Tags
sentai filmworks
« Previous Post
Good Smile Company Reveals Weird Nendoroid "Miku Dayo"
Next Post »
Japan Fans Name the Popular Anime Most Likely To Be Remembered Years From Now... And Ones Likely to Be Forgotten
Other Top News
32 Comments
Sort by: