Shinichi "Nabeshin" Watanabe's take on the franchise kicks off next Saturday at 12:30 a.m 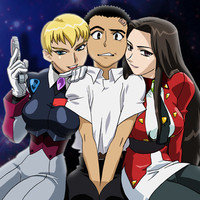 The end of Adult Swim's run of Casshern Sins invited plenty of speculation about what, if any, anime might be replacing the dystopian sci-fi. FUNimation then cleared up the suspense with news that the Cartoon Network programming block will air sci-fi comedy spin-off Tenchi Muyo GXP. Shinichi "Nabeshin" Watanabe's (Excel Saga, Wallflower) take on the franchise kicks off next Saturday at 12:30 a.m.

From FUNi's description of the series

Seina Yamada’s luck is way worse than bad. He can’t get through a day without causing serious harm to himself and any unfortunate souls nearby. So what in the world could two gorgeous Galaxy Police officers want with him? Just as soon as their spaceship lands, Seina’s blasting off into space with the beauties. It appears his luck could be changing for the better!

InuYasha will also be airing for an hour at 5:00am.